The Origins of the Paralympic Games

Starting today and continuing through September 18th, 4300+ athletes from more than 160 countries around the world will complete in the Paralympic Games – an international, multi-sport event for athletes with a range of disabilities, primarily physical.

This year’s Paralympic Games, held in Rio de Janeiro, will have 528 medal events in 22 different sports - from archery and table tennis to judo and cycling. It will be the first year for Canoe and Triathlon.

The concept for the Paralympic Games goes back to the 1940s when an English neurosurgeon named Dr. Ludwig Guttmann, who opened a spinal injuries center at the Stoke Mandeville Hospital in Great Britain, began using recreation and sport as a catalyst for rehabilitation therapy. According to the Paralympic website:

On July 29, 1948, the day of the Opening Ceremony of the London 1948 Olympic Games, Dr. Guttmann organized the first competition for wheelchair athletes which he named the Stoke Mandeville Games, a milestone in Paralympics history. They involved 16 injured service men and women who took part in archery. In 1952, Dutch ex-servicemen joined the movement and the International Stoke Mandeville Games were founded. These Games later become the Paralympic Games…

The first official Paralympic Games were held in 1960 in Rome, in conjunction with that year’s Olympics. Four hundred athletes from 23 countries participated in 8 events (archery, basketball, fencing, javelin, shotput, and three swimming events).

Since 1960, the Paralympics and Olympics have been held, when possible, in the same city or country. According to the official Paralympics website, the word “Paralympic” is derived from the Greek preposition “para” (alongside) and “Olympic” – signifying that the Paralympics are the parallel Games to the Olympics and exist side-by-side. Thanks to an agreement between the IPC (International Paralympic Committee) and IOC (International Olympic Committee), the Paralympic Games have taken place in the same cities and venues at the Olympics since the Summer Games in Seoul, Korea (1988) and the Winter Games in Albertville, France (1992).

The Games have changed and evolved during the last 6 decades. In the 1960 Rome Games, only wheelchair athletes competed. The 1976 Toronto Games included athletes with vision impairments and amputees. During the 1996 Atlanta Games, tickets, television rights and sponsorships were sold for the first time. At the 2000 Sydney Games, 300 world and Paralympic records were set. And, the 2008 Beijing Games was the second biggest sporting event in the world. During this year’s Games, more than 1600 athletes will be women, an increase of 9.9% from the London 2012 Paralympic Games and a 50% increase from the Atlanta 1996 Paralympic Games.

For more information about this year’s Paralympic Games, or to watch key events live with your family, visit: https://www.paralympic.org

American Christmas Traditions and Their Origins
2018 Host Family of the Year Winner - The Halberg Family from San Francisco!

Happy Father's Day from apex PROaupair!
Learn about our 2021 Host Family of the Year finalist! 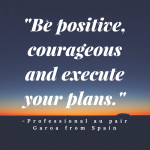 Advice for a Successful Year with Your Professional Au Pair
Fun Activities For a Cold Winter’s Day!