PROaupair's Au Pair of the Year winner Robert Isemer was awarded the International Au Pair Association's Au Pair of the Year Award 2016.  Robert, a 27 year old German professional au pair with a degree in sports medicine and early childhood education spent a year living with the Thurman family of Ashland, Virginia. Caring for 10 year old Alex who has special needs. During his year, he touched the lives of his host family and the entire community. 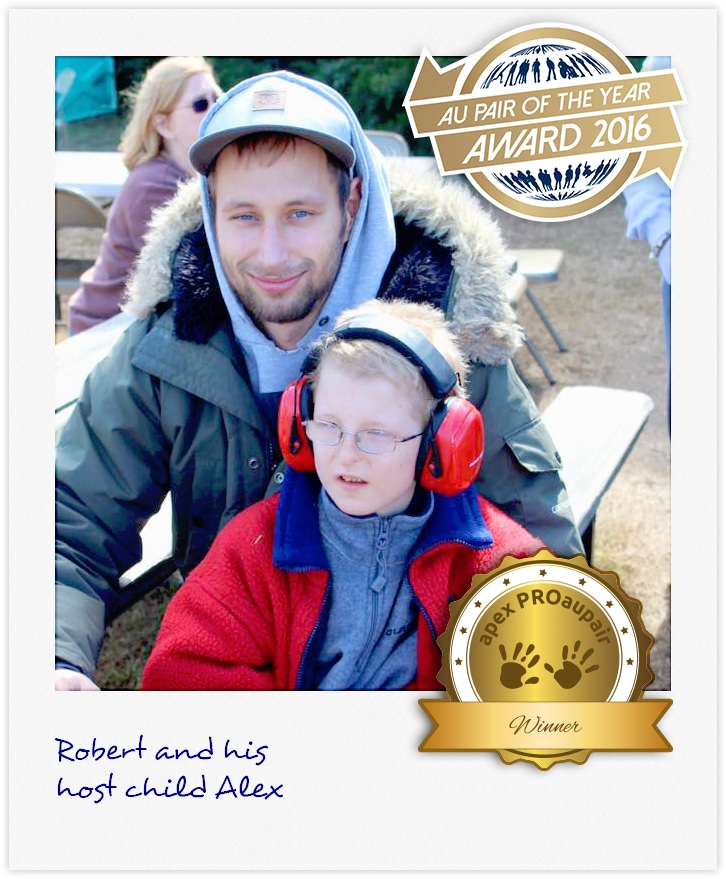 Our family’s au pair, Robert Isemer, epitomizes the perfect au pair in so many ways.

Upon his arrival, Robert overcame extreme health challenges. Just a week after his arrival to the United States, Robert (an athlete with an undergraduate in physical education) had a sudden onset of shortness of breath while swimming at our community YMCA. My husband took him to the emergency room where Robert was diagnosed with a spontaneous pneumothorax (collapsed lung). The hospital called in a thoracic surgeon who immediately put in a chest tube into the side of Robert’s lung to re-inflate it. Throughout this harrowing experience, Robert was most concerned about us and the impact to his ability to work- which we insisted was the least of our worries. After spending five days in intensive care in the local hospital, Robert was discharged and soon thereafter caught a nasty case of the flu. He made a speedy recovery and started work with vigor and enthusiasm.

We have a ten year old son - who has a great sense of humor, a curious nature, and also happens to have a very rare syndrome and autism. Robert was instrumental in providing natural supports for Alex to be an active part of family, school, and community. Robert was an extremely active participant in Alex’s schoolwork. Robert researched methodologies and implemented them to modify Alex’s curriculum so Alex could better participate in the general education classroom, versus in a segregated setting. Robert created a number of multi-modal materials, so Alex could better comprehend and retain the curriculum- in fact, Alex’s spelling tests improved from Cs and Ds to As and Bs during Robert’s stay. Moreover, Robert attended educational conferences (volunteering on Saturdays during his time off) that provided strategies (i.e., positive behavior supports, authentic inclusion and friendship) to better support people with disabilities. Robert volunteered at Alex’s elementary school where he served as a male role model while working with at-risk youth. Robert was an active participant with Alex’s Applied Behavior Analysis (ABA) provider to improve Alex’s challenging behavior. Robert taught Alex many life skills, such as independently fastening a seat belt (which enabled Alex to participate in the car pool lane instead of segregated pickup location), putting on his socks and shoes, and bathing. Alex has frequent medical issues and Robert supported him while preserving Alex’s pride and dignity.

Robert encouraged our family in our journey to a healthier lifestyle including researching recipes for the host grandmother who has diabetes and the host father who has high cholesterol, making the weekly menu (that often comprised of German recipes from his family, and often shopping at various stores to obtain locally sourced organic food). He supported his host Mom’s participation in CrossFit- in fact, Robert studied for and received his CrossFit Instructor Level 1 Certification. Robert started our son on a pathway of a lifelong healthy path by starting an exercise program to improve Alex’s sensory integration and overall health. Robert made lifelong friends with the members of the local CrossFit gym- many would comment to us how encouraging and what an inspiration he was during workouts. Amazingly, in Robert’s last week, the CrossFit gym hosted a Bon Voyage party with over 50 people who fondly said their goodbyes to Robert.

Above all, Robert was kind as a professional au pair. I tried to explain to him once the nuance I believe exists in the English language between the words nice vs. kind. To me, niceness stems from the brain whereas kindness comes from the heart- in other words, kindness is a genuine and authentic desire to support others to feel loved and feel they belong. Margaret Cho once said “Sometimes when we are generous in small, barely detectable ways it can change someone else’s life forever.” Robert Isemer, our family’s au pair, certainly changed our family’s life forever in so many positive ways and for that we are eternally grateful.

Submitted by the Thurman family of Ashland, Virginia Show less ›

Meet Mateja Starman (26), a Pediatric Nurse and professional au pair from Austria nominated by the Ahmed family of Bethesda, Maryland. Caring for baby Ayla, born with a cleft lip and palate, Mateja's training as a pediatric nurse and loving care gave the Ahmed family peace of mind when they needed it most. 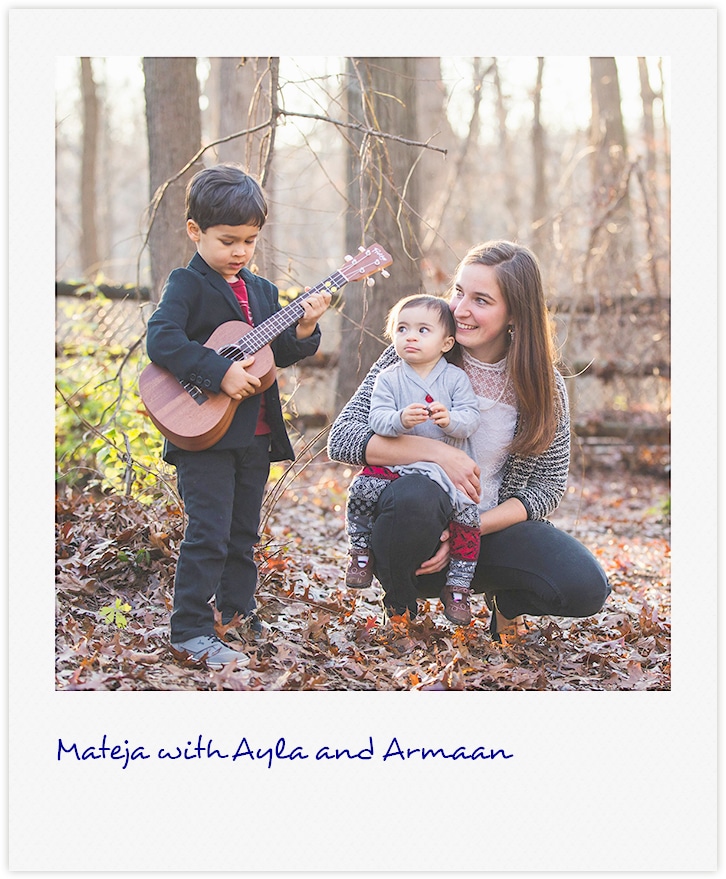 Mateja came to us as an au pair back in February, taking a break from her work as a pediatric nurse in Austria. Very soon after she arrived though, she became part of our family, a younger sister to us and an aunt to our children. That is really the only way to label our relationships. Mateja has bonded with our family and provided such outstanding care to our children, going above and beyond, through efforts that could only come from a place of deep and genuine affection.

Before we get to why we can say this, some context may be helpful. We are a small family of four, with both parents working intense jobs. Our son, Armaan, had just turned two in April 2014 when we found out we were expecting again. Our initial joy however was darkened with anxiety when we found out that our little girl - Ayla - would be born with a very wide, unilateral, complete cleft lip and palate. With no family history of medical issues, we were devastated. We feared for our baby and how we would care for her through the surgeries she would need to endure in her first year. Through a friend, we found Pro-Aupair, and after interviewing just one candidate, we knew we had found someone who would be at home with us and who would provide exceptional care to our children. As Mateja said herself at the interview, “I think we will be a good team.” And indeed we have been.

Ayla had the first of her three cleft repair surgeries a week after Mateja arrived. After every surgery, we struggled to keep our little girl as comfortable and healthy as possible. Neither were easy. It was a challenge to keep her safe and hydrated enough to not return to the hospital. We were often red-eyed from tears and stress. Mateja was an invaluable part of our family support team and made sure Ayla stayed on track in her recovery, exercising patience and skills from her work feeding premature babies.

It truly was a team effort as we all experimented and shared ideas on the best ways to care for Ayla. On days Ayla would fight the special post-operative feeder, Mateja would sit with her for hours, feeding her drop by drop. When Ayla stopped accepting food via syringe altogether after her last surgery, Mateja experimented with different utensils and foods till she found the right combination that Ayla would accept. By the end of Ayla’s last recovery period, she was eating more food than she had been before her surgery. Such dedication doesn’t just show that Mateja is a good nurse with strong technical skills, but also demonstrates how much she cares about Ayla.

This level of care is something she has shown in all her interactions with our children, keeping them physically and emotionally well. For example, she has such a close relationship with Armaan that she can tell whenever something is bothering him, even when he is less than forthcoming. In the past year there have been several times when he has been upset about things that happened at his pre-school, but that teachers have neglected to tell us. However, Mateja always knows when something is wrong and is able to figure out what is bothering him, to comfort him herself and to let us know.

In addition to being an exemplary caregiver, Mateja has made our home a happier place and has shared her culture and been open to learning about ours. Over the past eleven months, there has not been a single day when she has not been cheerful and smiling, and that positive attitude has noticeably brightened our home. Mateja has a very easy-going personality and has enthusiastically embraced our family life, from watching presidential debates, learning to make Bangladeshi curries, going trick-or- treating, riding an elephant with Armaan at a Renaissance festival and making special birthday cakes for Armaan and visiting grandparents. We have also embraced many Austrian customs and Mateja even coordinated an “Austria” week with flag making, classical music from Austrian composers, and the celebration of international wiener schnitzel day. We have shared many conversations about life experiences, dreams, hopes, and hobbies and have enjoyed seeing our culture through Mateja’s eyes. Getting to know her so well has also allowed for frank exchanges about ideas and concerns, so much so that not only have we never had any issues at all with each other, but we continue to have rich discussions on a range of topics.

In our eyes, Mateja thus fully deserves to be “au pair of the year”. She has not only excelled at caring for our children during challenging times, but has also become an integral part of our family.

Submitted by the Ahmed Family of Bethesda, MarylandShow less ›

Meet Simone Mayer (23), an Occupational Therapist and professional au pair from Germany nominated by the Schultz family of Vienna, Virginia. Caring for 9 year-old Asya who is wheelchair bound, the Schultz family can't believe their luck having this "Saint" living with them. 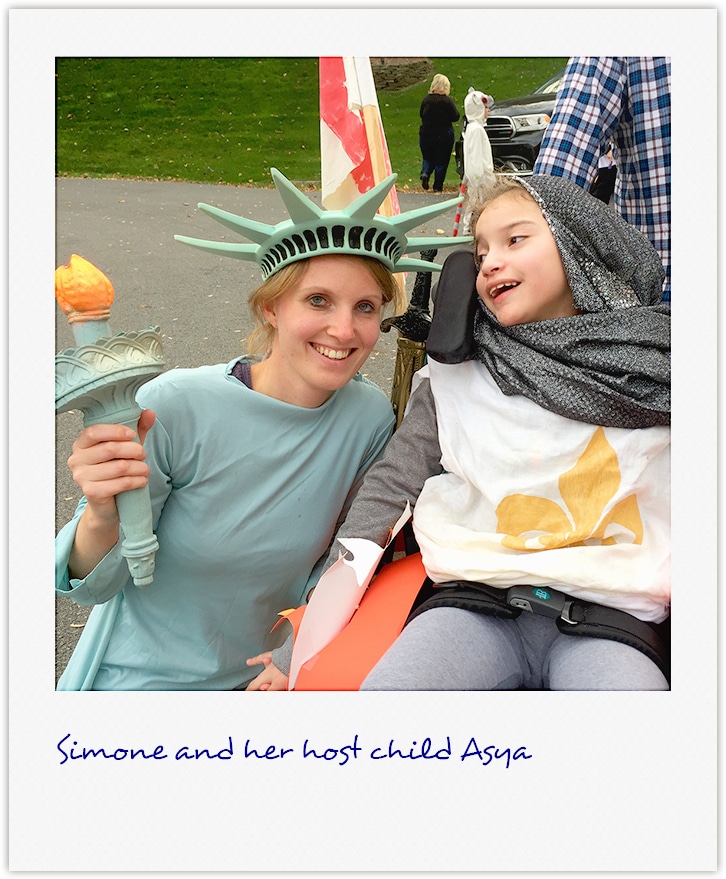 Giving, loving, gentle, unselfish, organized, talented, hardworking, always on time...we could go on and on describing this beautiful person, who came into our family in August to help with our adopted special needs child.

Simone Mayer arrived in August after many months interviewing with us. You can tell by the first picture of our daughter that this was going to be a match made in heaven. From day 1, after bringing a beautiful memory book for our daughter to put together this year filled with their pictures and fun memories, to her cooking our entire Oktoberfest party, she tirelessly has been on a mission to make hundreds of Christmas cookies to share with us and the many teachers, therapists and other nurses who come to our home each day.

Never once have we heard her complain...oh, just once that we didn’t put the lid on the cookie container tight enough. She continually entertains and works with our wheelchair bound angel creating projects to involve her fine motor control, to exercising her daily so her spastic limbs move better, to singing German folk songs while feeding our daughter, who depends entirely on caregivers to feed her as well as perform all the activities we take for granted with a child who is typical.

Our lives have been blessed having this saint living here and she has totally become one of our family! If it would not cause an international incident, we would think of kidnapping her forever. Asya, our daughter squeals so happily when Simone appears, it makes us thank God Simone chose us as much as we chose her.

Submitted by the Schultz Family of Vienna, VirginiaShow less ›

Programs in Other Countries